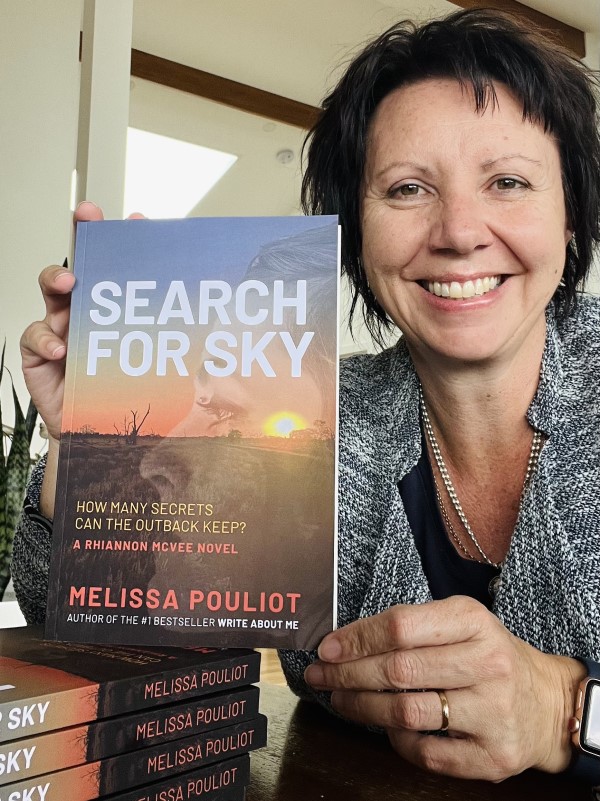 Missing people, the stark landscape of the Australian outback and the police system in the mid 90s combine for Melissa Pouliot’s next page-turning crime novel, Search for Sky. The fourth instalment in the Rhiannon Series picks up the story of detective Rhiannon McVee who has made a name for herself with her new approach to investigating missing persons cases. Her approach is simple – find them – but it’s not how the culture of the police system works. When someone starts leaving clues in the remote outback, leading Rhiannon closer and closer to a suspected serial killer, will the next body she discovers be the people she is searching for, or someone else?

Search for Sky is my much awaited sixth book after I took a break from writing when Kings Cross Detectives found my cousin Ursula in 2017 after a 30 year search.

Prior to that I released a book a year in an effort to keep public scrutiny on the disappearance of Ursula in 1987 when we were teenagers.

I’m thrilled to back into my fiction writing after taking a break. It has been a fairly intense few years for everyone that I know. For me, discovering what happened to Ursula and going through the coronial process, bushfires, COVID and moving house created the (im)perfect storm. Every time I tried to pick up this book which I started in 2017, the words wouldn’t come. It’s an age-old excuse for writers, but life definitely got in the way!

What is it about?

Hope can come from the most surprising of places.

In Australia Ayala Philips is still missing.
So is Keely Johnson.
So are thousands of others.
Their cases are getting colder and Rhiannon McVee’s hopes of solving them are fading.

When someone starts leaving clues in the remote Australian outback, leading Rhiannon closer and closer to a suspected serial killer, will the next body she discovers be Ayala, Keely or someone else?

Crime fiction inspired by real life, written by the cousin of one of Australia’s most compelling and heartbreaking missing persons cases.

Melissa Pouliot1 week ago
The book that started it all, Write About Me, has been chosen for a special promotion in the US and UK and going to be free on Amazon Kindle over the weekend.

Here are some quick facts about my book baby which I self-published in 2013.

💛 When I submitted my draft to a literary agent in Australia they said it wasn't strong enough for the current fiction market
💛 Within three months of being published over 50,000 people had downloaded and read the book around the world. That number has now passed 100,000.
💛 This book was the catalyst for a new investigation into the 26 year cold case mystery of my cousin Ursula, who went missing aged 17 in 1987.
💛 Five years after publishing Write About Me, I published the sequel, FOUND to mark that Ursula was finally found after 30 years missing.
💛 Write About Me ignited a whole new creative passion in me and I have now published 6 crime fiction novels and am working on my 7th.