I have a different kind of thank you to send out today. This one is to the people who have shared photos from their old albums and their memories of Ursula this week after seeing ‘Forever Young’ on Australian Story.

One of the hardest things for me during my very public quest that started in 2013 to find Ursula was finding photos of her. The morning of the first Picnic for Ursula in Bell Park, Quirindi, our Nanna Elle presented me with a package of photos found in an old cottage where Ursula used to live of photos including the one you’ve seen everywhere of her wearing a yellow T-shirt, her favourite colour. Plus the precious photos of her with her school friends that you saw on Australian Story.

But now I have so many more, and I am so so grateful to the people who have contacted me to share them! 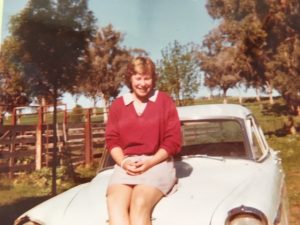 Here is a photo of Ursula on an old car from one of her neighbours Lee Hartigan that she loved to drive (like all farm kids she could drive as soon as her feet reached the pedals). It was taken in 1983. 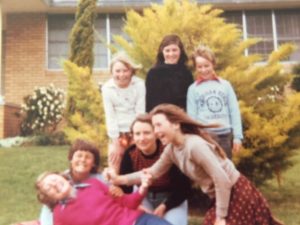 The second is another photo from Lee, at a girl’s sleepover, when Ursula was much younger. This photo was taken in 1979. Sadly Lee’s sister Sharon, back left in this photo, passed away unexpectedly a year after this photo was taken. I was quite young at the time so I don’t remember but I know that Ursula would have been absolutely devastated. My memories with Lee and Ursula are on our motorbikes as we raced our way through the mountains, at pace! 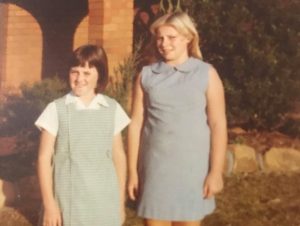 The third photo is from a complete stranger named Renae who watched Australian Story and thought she recognised Ursula from when her family billeted Ursh in 1980 during a school exchange. Ursula was at Manilla Primary School at the time. Renae says “I can still remember her liking to talk a lot and a loud belly laugh!”

I have received more precious photos of Ursula  that I will share with you at some stage, but for now I’d just like to let everyone know how grateful and appreciative I am that they have taken the time to get in touch and share their memories of our bright and bubbly Ursh.

Melissa Pouliot18 hours ago
LIVE STREAMING TICKETS NOW AVAILABLE! Australia’s most popular female crime writers will converge on the Bega Valley in late August as Sisters in Crime return to Cobargo! 🎟️📚⁠ and you can be part of it from anywhere in the world 🥳
⁠
Join lead investigator Melissa Pouliot (me!) and a fantastic line-up of women crime writers including Candice Fox, Vikki Petraitis, Sulari Gentill, Fleur Ferris, Ilsa Evans, Dorothy Johnston, Caroline de Costa and Kay Schubach. ⁠
⁠
Presented by Headland Writers Festival and Well Thumbed Books, this one-day program of conversations and panel discussions is not to be missed. ⁠
⁠
Saturday 27 August @ Cobargo School of Arts Hall, from 10am - 4:30pm. ⁠
⁠
Tickets at:

Melissa Pouliot3 weeks ago
I might have just lit the fire because I’m freezing cold but Search for Sky certainly isn’t 😆 My books get to travel to the most exotic and wonderful locations 🫶 🏝 🥥 🍹 📖
.
.
#booksonlocation #bali #searchforsky #booktravel #travel #beachread #crimefiction #crimefictionbooks #rhiannonseries #rhiannon #rhiannonmcvee #maomi💞