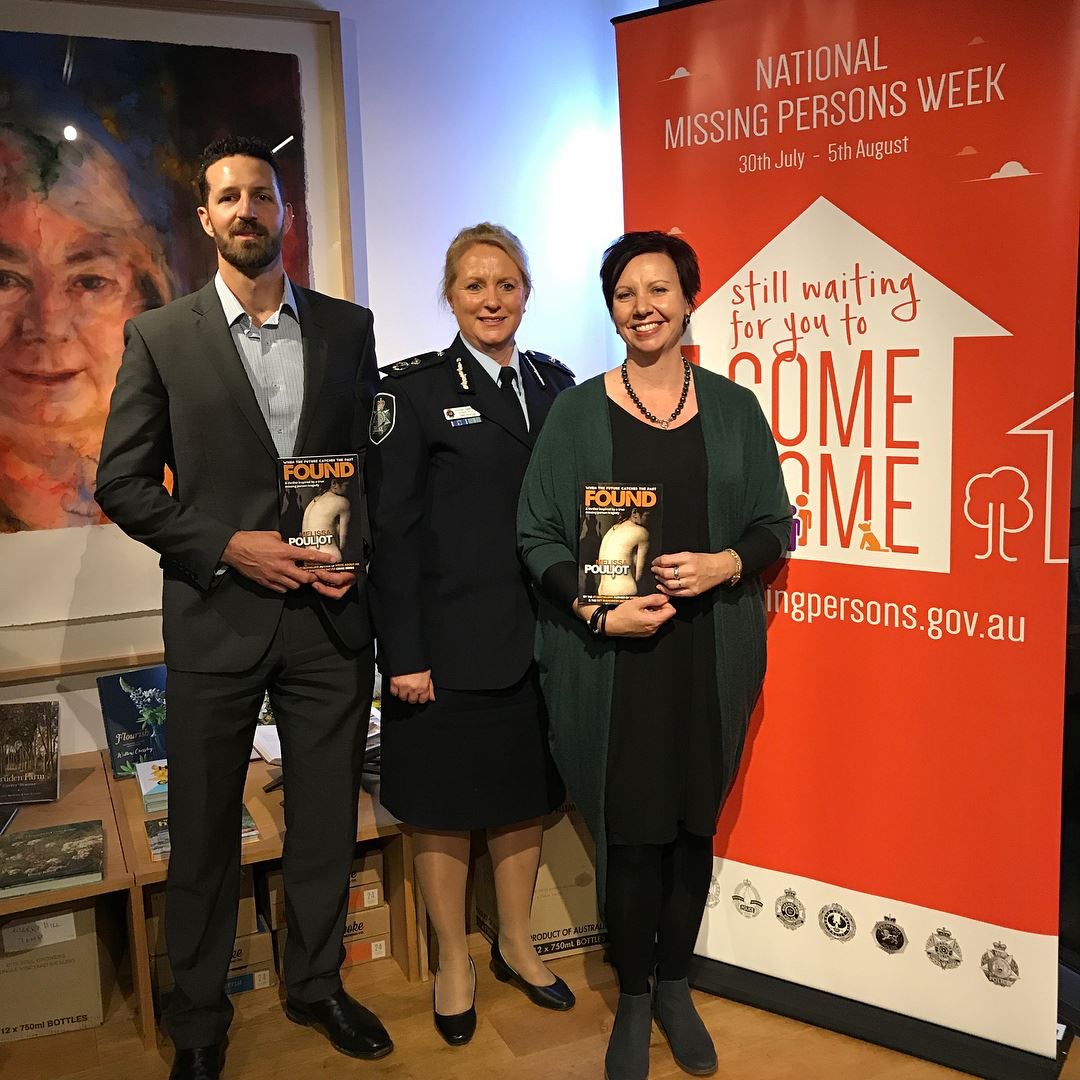 It was an honour and a privilege to have the Australian Federal Police launch my fifth crime novel, FOUND , in the perfect book launching venue of Muse Canberra in July. The AFP National Missing Persons Coordination Centre has played a pivotal role in the search for Ursula since 2013, and endorse all my fiction novels for raising awareness for missing people.
All my special people were there to wrap me in love including my family and friends and other authors, as there was a lot of emotion surrounding the launch as it was the first time I spoke publicly about the story behind the story – that Ursula had been found .
I was thrilled to also meet other families of missing people and some of Canberra’s keen reading crowd. Kings Cross Detective Sergeant Kurt Hayward, who led the search for Ursula prompted by the release of my first novel Write About Me, was also there.
The 30-year search for Ursula involved a entire village of people who never gave up: her family, her friends, the AFP, the broader community and Kurt and the investigating team for Strike Force Hemingway that also included Detective Senior Constable Amy Scott.

Launch speech
Below is part of the launch speech by AFP Assistant Commissioner Debbie Platz, which made me feel humbled and extremely fortunate to be where I am today, as a strong advocate for missing people and an established fiction author. And the family member of someone I have missed for 30 years, who thankfully now is found.

“You will know there is a personal touch to all Melissa’s books, through her cousin Ursula who went missing in 1987. Ursula was the first person in Australia that the National Missing Persons Coordination Centre age progressed in 2010, she was age progressed to 39 and her picture placed on billboards in Sydney airport. She was featured again as part of National Missing Persons Week in 2015, and a result of that, we received many leads from various parts of Australia in our efforts to try and find Ursula. Fast forward to this year and tonight, 30 years after Ursula was first reported missing, and the launch of Melissa’s novel FOUND. This picks up the story of teenage runaway Annabelle Brown who we first met in Melissa’s first international #1 bestselling book Write About Me.
Melissa’s first story was published in a newspaper when she was 8 years of age, Santa’s Elf, and since then we’ve seen her go from strength to strength tonight, to launch the fifth in her Missing Series, FOUND.
What is profound about Melissa’s books is that because of her personal connection with the storylines, the things that have happened in her life, she can actually tackle complexities of missing people. She can show us what it’s like to feel hopeful, and also despair and what it’s like to feel hopelessness. Melissa is also an advocate for missing persons, an Ambassador for Daniel Morcombe Foundation, and by what I can see tonight here with her family and friends, she is really well respected and loved by everybody who comes across her. I know for a fact that the people at the National Missing Persons Coordination Centre are deeply indebted to Melissa for the work she has done, and love spending time with her.”